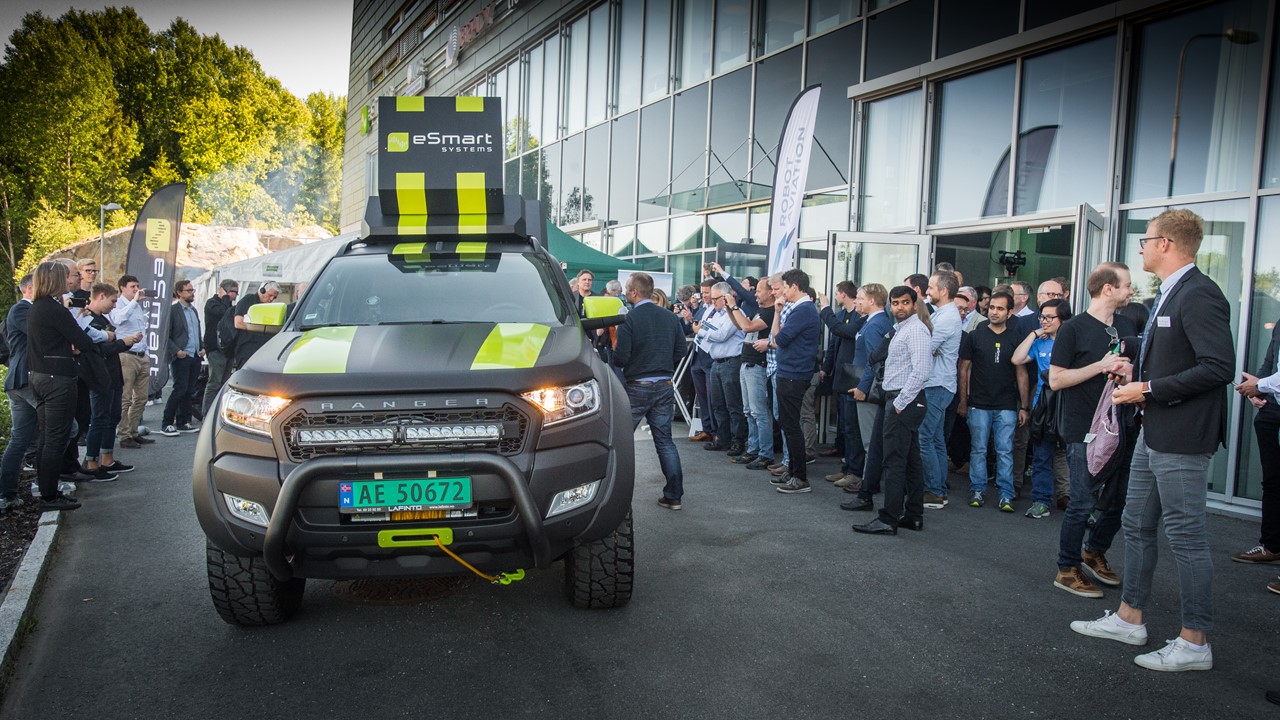 Thursday June 1st, eSmart Systems hosted the most important arrangement in the company’s history so far. The Connected Drone Launch brought 120 customers and partners to Halden, reached over 21.000 people by live stream and was broadcasted on the radio in Fargo, USA.

Grid operators, partners and customers from all over Norway were invited for the big happening at Remmen Business Park in Halden June 1st. 2017. Interested parties from Germany, Denmark and Sweden were also represented.

eSmart Systems’ R&D project Connected Drone started in January 2016, with a planned duration of three years. Up until now, it has “only” been a project, but with the launch on Thursday 1st., Connected Drone is also hitting the market as a product ready for use.

This is the most important arrangement in eSmart Systems’ history. We want to communicate to the world that we now have a product which can totally change the way one uses inspection data

The project goal is to make power line inspections safer and less expensive, by taking advantage of drones equipped with Artificial Intelligence

The Connected Drone launch was not limited to concern only Norwegian and European participants. Representatives from eSmart Systems were also launching Connected Drone in Fargo, USA, at the very same time as in Halden. As in Halden, this was a great success. See the product launch video here:

eSmart Systems’ drone project is revolutionary – never before has there been anything like this software available on the market.

What makes the project unique, is that we use such a diversity of new technology, that has to be able to function together in ways it has never done earlier

This summer’s launch is just the beginning of eSmart Systems’ drone adventure. For even though the project has now resulted in a product, the research and development of new and better solutions continues.

We have proved we can fly drones. We can fly them far and we can provide and analyze amounts of data that previously would take one person a year – in less than an hour. All because of an Artificial Intelligence we are continuously making smarter; Which in itself is quite sensational

With many of the most important actors in Scandinavia present at the launch in Halden, the Project Manager hopes soon to be able to take Connected Drone even further.

And just as Tore Lie had hoped for, the second phase of the Connected Drone project was approved by the project’s management group no more than 12 hours after the launch of June 1st.

Our team has worked intensively towards the launch and  they have all been amazing. All grid companies have expressed they were greatly impressed. A “thumbs up” for further development of Connected Drone was great and extremely important!

Parts of this article is taken from NCE:Smart Innovation Norway.